Power’s Inn & Pub, the Capital district’s historical inn and pub, was originally built in 1786. Power’s offers lunch, dinner and drinks in our six unique dining rooms, pub and outside deck. Enjoy daily specials, rotating craft beer, hand crafted cocktails and an experience you will not forget.

Power’s Inn And Pub comes to you with a long and interesting history. This property was originally the hunting ground for the Mahicans Indians called Kayadrosseras, (the locals pronounce it Kay –der-ros). When the Dutch came to the area they purchased the Kayadrosseras from the Mahicans for a pittance sum. The Indians thought this was rent for a generation; the Dutch thought it was a purchase forever.

In 1693 Robert Livingston and David Schuyler filed a petition to the Crown (England) for a Patent License. That meant they would promise to bring 50 families to the area and develop the land. Livingston & Schuyler were denied the Patent License, but about 10 years later, in 1701, Sampson Broughton, Esquire petitioned to the Crown for a Patent License. Sampson became ill, died, and the Patent was granted to the Widow Mary Broughton who then returned home to England taking the Patent papers with her. When it came time for her son to prove he was part Patentee, no paperwork was to be found to show to the Indians. The Mahicans wanted to be paid for another generation!

The next buyer of the property was John Stevens who could not afford the property alone, therefore he and 12 businessmen formed a partnership, surveying the land and sectioning the Kayadrosseras Patent into 25 primary sections and each primary section into 13 subsections. This old building and property is one of those 13 mini sections. A copy of his “Warrant for Kayadrossera” is on the wall somewhere in this building. See if you can find it. During the Revolutionary War, Ephraim Schouton purchased our little subsection and built this yellow house. He and his wife Catherine are buried in a tiny Halfmoon cemetery nearby. So if you see shadows of Revolutionary War military men in the night, they were/are here. 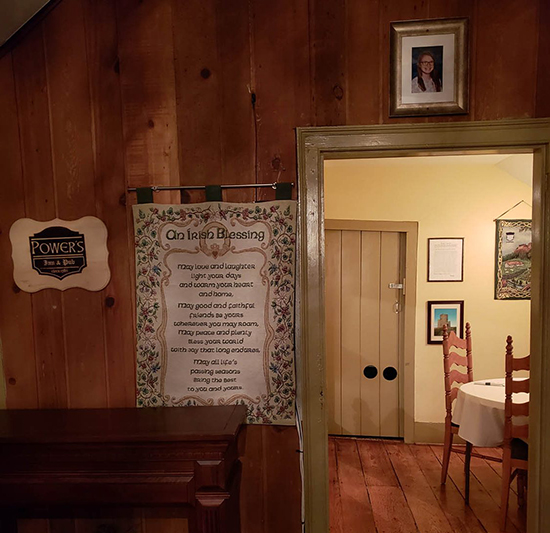 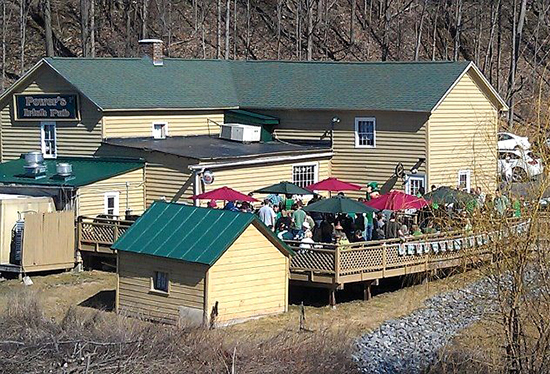 The property changed hands several times but the next significant owner was Christian Meyer. He was a blacksmith who probably operated his business out of the barn next door. It is for his family that the Street was named. See if you can find the deed of purchase somewhere on the walls. The most successful tavern keeper was George Dater. Although the Dater’s owned the house in 1866, their family lived here into the 1940’s. The Hoffman family have owned this beautiful house since 1965 till Bryah Gifford purchased it in 2020. Bryah and his parents, Randy and Peggy Gifford, were proud to start Power’s here in October of 2011 and carry on the property's colorful history. There are a number of wonderful, friendly spirits in the house. You can say hello to Emma in the Entry, Sophia and Robert in the Ballroom and if you bang on the floor you might have Jim bang back!

Bryah Gifford beautifully restored the barn just next door as an event venue for Giffy's BBQ catering, a division of Power's. The Barn at Power’s was originally built in the 1820’s and was Archie Meyers' blacksmith barn. It was fully restored and is now a year round banquet and catering facility for weddings, showers and events.

Who is P3? He is Bryah Gifford’s grandfather. Paul Patterson Power (the three P’s = P3) had a larger than life personality with a big Irish heart! His influence on the family will have a many generation effect. On the walls you will find lots of Paul’s family photos. See if you can find the naturalization paper of Paul’s grandfather who came from Ireland during the Potato Famine.